Home
Entertainment
From Gaga to Garth: Stars Return to Inauguration

From Gaga to Garth: Stars Return to Inauguration 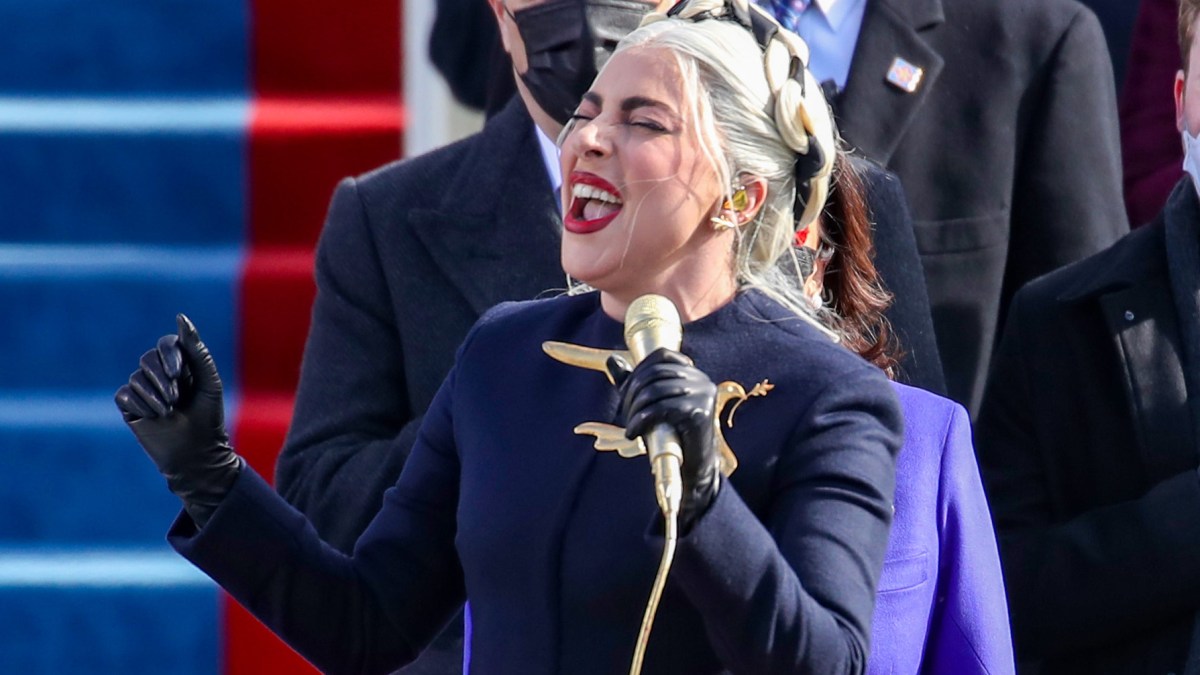 A full-throated, supremely confident Lady Gaga belted out the national anthem at President Joe Biden’s inauguration in a very Gaga way — with flamboyance, fashion and passion.

The Grammy winner wore a huge dove-shaped brooch and an impressively billowing red sculpted skirt as she sang into a golden microphone, delivering an emotional and powerful rendition of “The Star-Spangled Banner.” She was followed at Wednesday’s ceremony by Jennifer Lopez, dressed all in white, who threw a line of Spanish into her medley of “This Land is Your Land” and “America the Beautiful” — a pointed nod to multiculturalism, just two weeks after white supremacists and other violent rioters stormed the Capitol in an effort to undermine the peaceful transfer of power.

And country star Garth Brooks, doffing his black cowboy hat, sang a soulful a capella rendition of “Amazing Grace,” his eyes closed for much of the song. He asked the audience to sing a verse with him: “Not just the people here, but the people at home, to work as one united.”

The three superstars were among a slew of glittery celebrities descending on Washington — virtually or in person — to welcome the new administration of Biden and Kamala Harris, a duo popular in Hollywood, where former President Donald Trump was decidedly not. While stars mostly eschewed Trump’s inauguration four years ago, the A-list was back for Biden.

Brooks was careful to call his decision to perform on Wednesday non-political, and in the spirit of unity. He had performed during the inaugural celebration for Obama in 2009, but turned down a chance to perform for Trump in 2017, citing a scheduling conflict.

Gaga went on Twitter later to explain that the giant brooch accompanying her Schiaparelli haute couture outfit was “a dove carrying an olive branch. May we all make peace with each other.” Lopez was in all-white Chanel, and Brooks kept it real in jeans, an open-collared black shirt and blazer.

While the podium was full of high-wattage star power, there was little question that a new star had also emerged: 22-year-old poet Amanda Gorman, whose poise and urgency as she recited “The Hill We Climb” enthralled a global audience.

None other than Bruce Springsteen launched the evening’s entertainment: “Celebrating America,” a 90-minute, multi-network broadcast hosted by Tom Hanks that took the place of the usual official inaugural balls, with Biden and Harris watching along and giving brief remarks. Alone with his guitar, The Boss sang his “Land of Hope and Dreams” in front of the Lincoln Memorial. “I will provide for you, and I’ll stand by your side,” he sang. “You’ll need a good companion, for this part of the ride.”

Hanks, also at the Lincoln Memorial, spoke of “deep divisions and a troubling rancor in our land” over the past few years. “But tonight we ponder the United States of America, the practice of our democracy, the foundations of our republic, the integrity of our Constitution, the hope and dreams we all share for a more perfect union,” he said.

Jon Bon Jovi contributed a rendition of “Here Comes the Sun” from Miami, and Ant Clemons and Justin Timberlake performed “Better Days” from Memphis. John Legend sang “Feeling Good” in Washington; Foo Fighters sang “Times Like These” in honor of teachers, and Demi Lovato performed “Lovely Day” along with doctors and nurses in Los Angeles.

A starry collection of Broadway’s most prominent musical actors collaborated on a medley of “Seasons of Love” from the show “Rent” and “Let the Sunshine In” from “Hair,” among them Christopher Jackson, Renée Elise Goldsberry, Laura Benanti, Betty Buckley, Leslie Uggams and Javier Muñoz. “Hamilton” creator Lin-Manuel Miranda recited from “The Cure at Troy” by Irish poet Seamus Heaney.

Reciting excerpts of notable past inaugural addresses were basketball legend Kareem Abdul-Jabbar, labor leader Dolores Huerta and Kim Ng, the first female general manager in MLB history. Peppering musical performances among stories of ordinary Americans and their contributions, the show included tributes to a UPS driver, a kindergarten teacher and Sandra Lindsay, the first in New York to receive the COVID-19 vaccine outside a clinical trial.

The proceedings ended with a lavish fireworks show in the Washington night sky, watched by Biden (at the White House) and Harris (at the Lincoln Memorial) and their families to — what else? — “Firework,” performed by Katy Perry.

The history of celebrities performing at inaugurations dates back to Franklin D. Roosevelt’s third inauguration in 1941, when a gala celebration the evening before saw performances from Irving Berlin, Mickey Rooney and Charlie Chaplin, says Lina Mann of the White House Historical Association. “Chaplin performed his monologue from ‘The Great Dictator,’” Mann notes.

The celebrity component only increased over time, and one of the starriest inaugurations was that of John F. Kennedy in 1961. That celebration, hosted by Frank Sinatra, drew Harry Belafonte, Nat King Cole, Ella Fitzgerald, Gene Kelly, Ethel Merman, Laurence Olivier, Sidney Poitier and other celebrities.

Fast forward to the first Obama inauguration in 2009, where Aretha Franklin sang “My Country, ‘Tis of Thee” at the swearing-in, and the new president and his wife, Michelle, were serenaded by Beyoncé singing “At Last” at an inaugural ball.