Emotional Lady Gaga Among Slew of Celebs at Stonewall Inn

Lady Gaga paid a special visit to New York City’s Stonewall Inn, helping mark 50 years since the uprising that catalyzed the modern LGBTQ rights movement in a way that only the versatile and colorful global superstar can.

Gaga dropped by the legendary tavern Friday afternoon — exactly five decades to the day of the infamous NYPD raid that ignited tensions and fiery protests in city streets for days and ultimately spurred the birth of the movement for gay rights both in the United States and around the world.

“It makes me cry. I am so emotional today,” a visibly teary Gaga, wearing jean shorts, a rainbow jacket and glistening red thigh-high boots, told the crowd.

“This community has fought and continued to fight a war of acceptance, a war of tolerance — and the most relentless bravery. You are the definition of courage, do you know that? This is a celebration of all of you in every single way.” 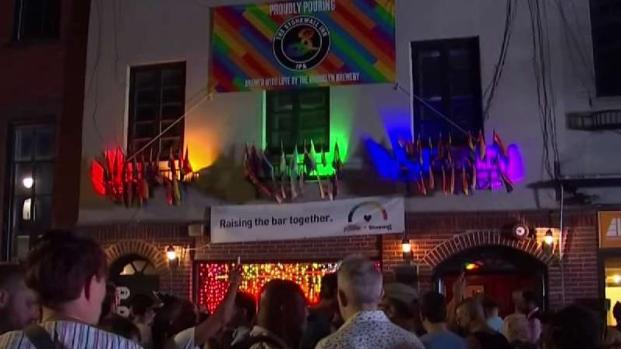 “I really, really hope you celebrate every inch of who you are today,” she told the crowd.

Gaga was just one of a handful of celebs and public figures to make an appearance at the event commemorating the uprising that sparked the modern gay rights movement. Chelsea Clinton, Donatella Versace, Whoopi Goldberg and Chirlane McCray all spoke to the crowd.

“We want equality. We want to be free,” Keys said before ending her performance with “Empire State of Mind.”

“I love you. We’re in this together. May we continue to fight for tolerance,” Keys told the crowd.

New York City Mayor Bill de Blasio also spoke to the crowd later in the evening, annoucning that Friday would be called Stonewall Day and pledging that the city will be the first in the world to build statues commemorating “trans heroes who helped fight for the liberation of everybody.”

Taylor Swift made her own surprise appearance at the Greenwich Village bar earlier this month, singing “Shake It Off” and her new single “You Need to Calm Down.” Democratic presidential candidate and former Vice President Joe Biden also paid a visit to Stonewall ahead of the 50th anniversary commemoration.

In 2016, days before the 47th anniversary, then-President Barack Obama named the iconic Stonewall Inn a national monument for gay rights, the first ever such designation for an LGBT site. He said the monument would “tell the story.”

Elsewhere in the city on Friday, performances by LGBTQ choruses from around the country rocked Times Square and Hugh Jackman sang “You Will Be Found” from the musical Dear Evan Hansen, alongside the Gay Men’s Chorus at Madison Square Garden.

On Saturday, the night before NYC’s famed Pride Parade steps off along Fifth Avenue, tune into News 4 at 7 p.m. for a 30-minute special on what happened at Stonewall, what has happened since — and where we go from here.