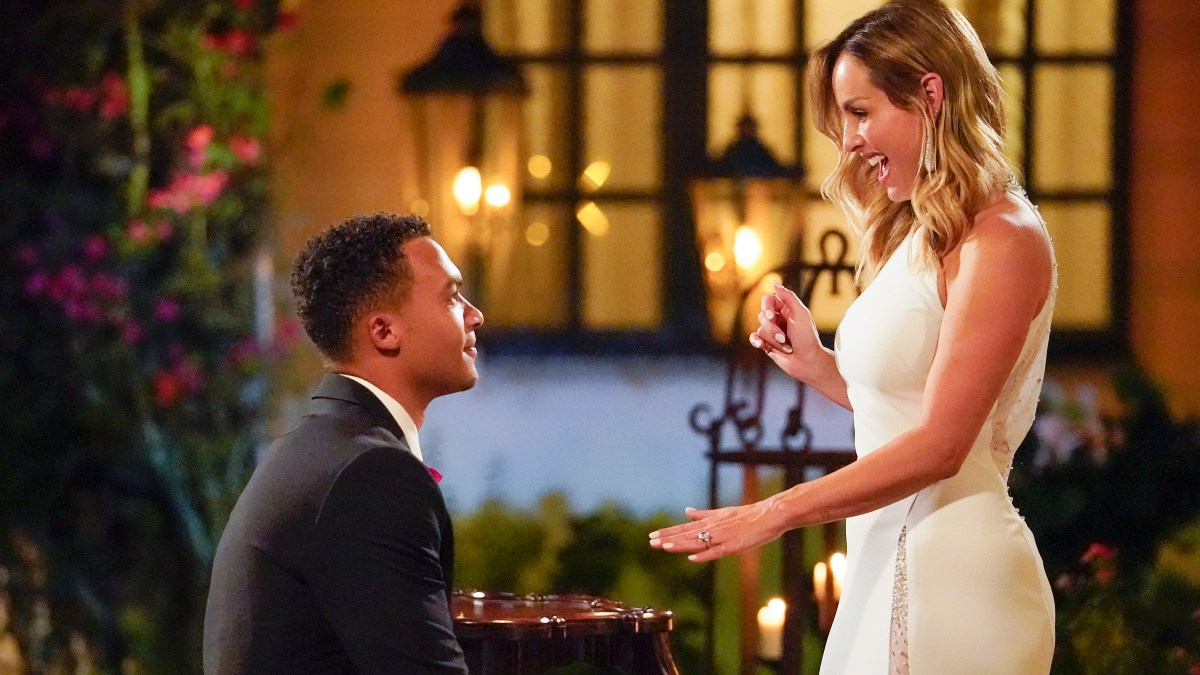 It only took four episodes for Clare Crawley to give out the final rose and get a rock on her left ring finger.

The “Bachelorette” said last week she couldn’t give out the second group date rose after all the guys had mocked her favorite contestant, Moss, during a roast.

Early in Thursday’s episode, Crawley told host and producer Chris Harrison that she was “head over heels for Dale.” She said she had looked at all the contestants’ social media and “built up” Moss before arriving to shoot the show, adding she could see herself “hanging out” with him forever.

She maintained that she hadn’t spoken to Moss before the show began filming.

“Don’t f— with me, did you guys talk at all before the show?” Harrison asked her.

“Not one single word,” Crawley said. “I swear on my dad’s grave.”

“I just spent years knowing what I don’t want,” she explained, adding quarantine gave her time to “focus in on what I do want.”

“So in your mind right now, is this over?” Harrison asked.

Crawley asked to spend a night with Moss instead of having another cocktail party and rose ceremony — much to the chagrin of the other men on the show.

“I am so falling in love with this man,” she said in a voiceover. “It’s a scary situation to express your feelings to someone for the first time…(but) love innately is taking risks.”

In a one-on-one date with Moss, Crawley and Moss bonded over how their parents had similar love stories. Their dads both hitchhiked to see their moms after they first met. They also bonded over becoming closed off after losing their parents and then emotionally opening up again.

Moss said he had immediately been taken with Crawley the moment they’d met.

“It was like, ‘What the hell is going on?’ I hadn’t felt these emotions in years,” he said.

Crawley echoed his sentiments, adding she initially thought she was “too into this” relationship with Moss.

Moss added that when he first met Crawley, he “felt love.”

“And I’m falling in love with you through this process. I’m not afraid to say that at all. My heart is open and I’m not going to fight that,” he said.

“What is happening?” Crawley asked.

After the romantic conversation, Chris and Bri from “The Bachelor: Listen to Your Heart” serenaded them. Then Moss and Crawley spent the night together without any cameras.

“I do have so many other great guys here … but nothing compares to what I have with Dale. Nothing,” Crawley said the next morning. “And I could most definitely, gladly, spend the rest of my life with Dale.”

In an interview, Moss seemed to think there was “a lot of time left in the process” — there wasn’t — to “really nurture this love that we have and really see where it goes.”

Later, Harrison informed Crawley that the next step in the process would be a marriage proposal that night.

“The next step: proposal,” Harrison told her when she asked him what to do. “That’s where we’re headed. You want that?”

“Of course I want that! That’s the dumbest question you’ve ever asked,” she laughed.

She had to then inform the 16 other men in an uncomfortable meeting.

“I am a woman that knows what I want and I’m going for it,” she said, tearfully. “I hope that what I have found in Dale, I seriously sincerely want for you guys.”

Explaining that the situation is “unprecedented” and letting Moss know Crawley had dumped all the other guys, Harrison then told Moss he needed to propose that night.

After worrying Moss wouldn’t feel the same, Crawley showed up to the night’s ceremony in a white, floor-length gown to offer him the final rose.

“I’m just so in love with the man that you are,” she said. “You made me feel like everything that I’ve ever been through, all the ups and downs and other relationships, it was all worth it because I’ve got you right now. And most importantly, you’ve shown me that you would never run away and never leave me and I’ve never, ever had a man who would stay. And you continue to show up for me. And I promise you I want to show up for you each and every day. You make me so happy.”

Moss replied that from the moment he’d stepped out of the limo, he knew “this was special.”

“There was absolutely no denying it. You made it so clear and apparent at every phase of this that you believe in it, you believed in you and I,” he said. “I know without a shadow of a doubt that you would go to the end of the world for me and I’ve never had that. And I’m so grateful for that.”

“I want to make you happy each and every day. So with that being said…” Moss said, getting down on one knee. “Clare, will you marry me?”

“Put that ring on my finger, I waited a lot of years for this!” she quipped.

Crawley then asked Moss to accept the final rose.

“It’s wild right, that we’re here right now, but like, when you know you know,” Moss said in an interview with Crawley later. “We saw this coming a long time ago.”

“We so saw this coming. I felt it! I knew it,” Crawley chimed in.

“I accepted it,” Moss laughed.

As there’s still a whole season ahead of the show, we would be remiss to not mention the new “Bachelorette.”

The following day, Harrison told the remaining guys about the engagement news.

“I do feel like you guys were cheated a little bit,” he said. “We’ve never dealt with something like this in the course of our show. And that’s going to cause us to do something historic as well.”

Harrison then dropped the bomb that if the guys wanted to stay, they would get another chance to find love.

“If you guys get dressed up and you show up tonight, that this journey would continue. And if you guys take this leap of faith, you will have a shot at love,” he said.

Some of the men seemed unsure but all of them decided to stay. That night, Tayshia Adams stepped out of a limo as the new “Bachelorette.”

She didn’t meet the men in this episode but did talk to Harrison before the evening’s festivities.

“I just know that this process moves very quickly and you start to invest a lot of feelings really early on,” she told him. “I don’t know if that’s the case for some of them, and if so, I am more than happy to have that conversation with them if they don’t feel like this is the right time for them or I’m not right for them.”

“But I feel like this is the right moment in time,” she added. “I wouldn’t be standing here I don’t think if it wasn’t meant to be.”

The show returns next Tuesday at 8 p.m. ET.

Social media had mixed reactions to the sudden — though entirely expected after months of speculation — proposal.

“Be nice to @Clare_Crawley, she gave us a love story. And ultimately that’s what I watch the show for,” Benjamin Higgins tweeted. “Also, she was never fake. She was quick and decisive but never fake.”

Still, more of Bachelor Nation seemed concerned about how fast Crawley and Moss were moving.

And finally, we’d be remiss to not point out the country is in the middle of an election and of course, there were even more jokes about the ongoing counting of ballots.